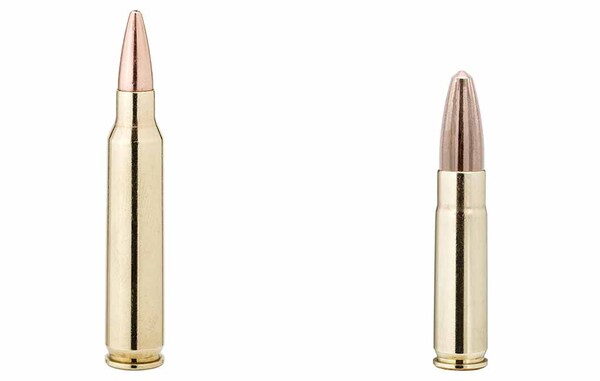 We have created this article to go in-depth on the details of the 5.56 vs 300 AAC Blackout Round, which might just silence the critics of the 300 AAC and the 5.56 NATO round's strengths and features. The.300 Blackout (BLK) is known by many nicknames, including "5.56 killer" and "black mamba." The recoil of a 300 BLK is 9 pounds, which is three times that of a 5.56mm bullet. However, the increase in recoil is barely noticeable and has little effect on accuracy. Varying from 300 to 500 yards, the 5.56mm round's range is significantly greater. The Advanced Armament Company designed this 9mm sub-machine gun to replace the MP5SD, a favorite of special ops units because of its high fire rate, low noise output, and compatibility with the M4 and AR-15. This is precisely what the .300 BLK accomplished. This provided a significant improvement for the AR-15 5.56 NATO/ .223 Round in the hands of civilians.

After .223, 300 Blackout is likely to be one of the most popular caliber choices for the 80% of AR-15 builders out there. 5.56 NATO or 223 Remington. In any case, why does the 300 BLK get so much focus? Increased curiosity about this round of ammunition can be attributed to the consistent proof of its effectiveness by elite shooters. However, you must first fully comprehend the advantages and disadvantages of this caliber before you can hope to master it on the range.

You'll be able to make more educated judgments regarding your arsenal after reading this post, as we outline the benefits and drawbacks of 300 Blackout ammunition and how to best utilize it.

We'll begin by explaining how the name of the caliber came to be. Blackout 300 AAC Blackout. The 7.62x35mm is another name for the .300 Blackout. You can tell it's a lot stronger round by comparing it to the ones above and below. 5.56 NATO or 223 Remington. The AAC is typically dropped from the name, although it stands for Advanced Armament Company, the firm responsible for developing this particular cartridge. The .300 BLK can trace its lineage back to the .300 Whisper, which was made to be used with a suppressor. The Whisper and the Blackout, however, are distinct concepts.

Similar to how the .223 and 5.56 differ in cartridge neck diameter, so do these calibers. To be on the safe side, suppose that .300-caliber bullets cannot be used in either the Blackout or the Whisper. The .300 Whisper can be fired from a .300 BLK rifle provided the correct ammunition is used. Additional standard comparisons of quality are as follows: Let's compare the rounds: 300 BLACKOUT vs. 5.56.  The 300 BLK has a greater destructive potential than the 5.56 because it fires a more robust bullet. However, 5.56 is half the price of the .300 and fires flatter and faster. The 5.56 round tends to fragment more easily than .300 BLK, reducing the possibility of over-penetration.

The Differences Between The 300 Blackout with The .308.

Blackout was developed to be used with normal AR-15 magazines while yet providing greater energy and better barrier penetration than the 9mm.

Because of its bigger size, the.308 round can deliver more power and penetration than the smaller .223/5.56 round.

Just like the 5.56, the .223 needs nearly twice as much barrel length for the powder to burn.

More powder than a .300 BLK is needed to fire it effectively. However, after 300 yards, 300 BLK bullets drop significantly more rapidly than the .223 round does. In close-quarters combat, the.300 BLK's ability to completely consume powder from a round fired from a 9-inch barrel is a major plus. To get the same effect with a .223 or a 5.56, you'd need almost twice as much length. The result is a weapon that, despite being significantly shorter, can dependably hit any target at ranges of under 300 yards. Both subsonic and supersonic rounds can be cycled through the Blackout without any adjustments. 5.56 is the superior caliber for long-distance shooting due to its flatter trajectory and faster muzzle velocity. It's not impossible to strike targets beyond 300 yards, but accuracy drops dramatically if the weather is taken into account. For targets beyond 300 yards, the .300 BLK has a tremendous bullet drop rate of 12 inches.

This wasn't always the case, but it is now given that we're still operating under pricing from the 2020 Ammo price hikes, a 300 BLK is currently twice as expensive as a 5.56 round. Assuming you can get your hands on all the required parts, having a reloading system could help you save money.

Even though the .300 BLK is fantastic for close-quarters combat, its high penetration means it may not be the ideal choice for protecting your house. If you shoot and miss your target, the bullet will likely go through several walls before coming to a complete halt. The dangers of over-penetration should not be disregarded by anyone who has to deal with a cramped living situation. However, 5.56 bullets tend to fragment upon impact, making them less likely to penetrate than .300 rounds. When used properly, the 300 AAC Blackout is an excellent and dependable round. When practicing on close-quarters battle (CQB) ranges, for instance, you can concentrate your firepower in a small area. Those who prefer to handload their bullets will appreciate the increased firing power with decreased powder consumption. The pros and cons have been laid out for you, and you can now proceed with confidence in creating your ideal weapon.

Shop now at Gorilla Machining, we carry all of the necessary accessories and parts to build out your dream 300 AAC Blackout Rifle or Pistol!